The Science of Influencing a Child’s Behavior

Most people can at least recognize Ivan Pavlov’s name and associate him with drooling dogs, although he received a Nobel Prize on a completely different topic. I threw that fact in for free! Pavlov’s work on classical conditioning was monumental in helping us understand that things that are learned can be unlearned. However, where many people fall short in their understanding of general psychology is lacking understanding about operant conditioning, or behavioral learning. Learning five principles of behavioral learning can make all the difference in knowing how to successfully influence your child’s behavior.

These principles won’t make sense if you don’t understand what reinforcement and punishment mean. And you’ve got to know specifically what is reinforcing and punishing for each individual child.

Punishment means something that your child does not like. For example, most children do not like chores, so chores are punishing for most children. What is punishing to one child may not be punishing to another. Some children may enjoy chores, especially if they find reward in immediate results.

Children have different dislikes, as well as different likes. You’ve got to find things that are reinforcing and punishing for your specific child. You may even want to ask your child about what is reinforcing to him/her.

The child will be much more likely to come and talk with the parent about difficult topics in the future.

If a child’s behavior is no longer followed by a previously reinforcing stimulus – something that your child liked – the subsequent rate, intensity, or duration of the child’s behavior will go down.

Here are 5 behavioral principles, in summary, in diagram format: 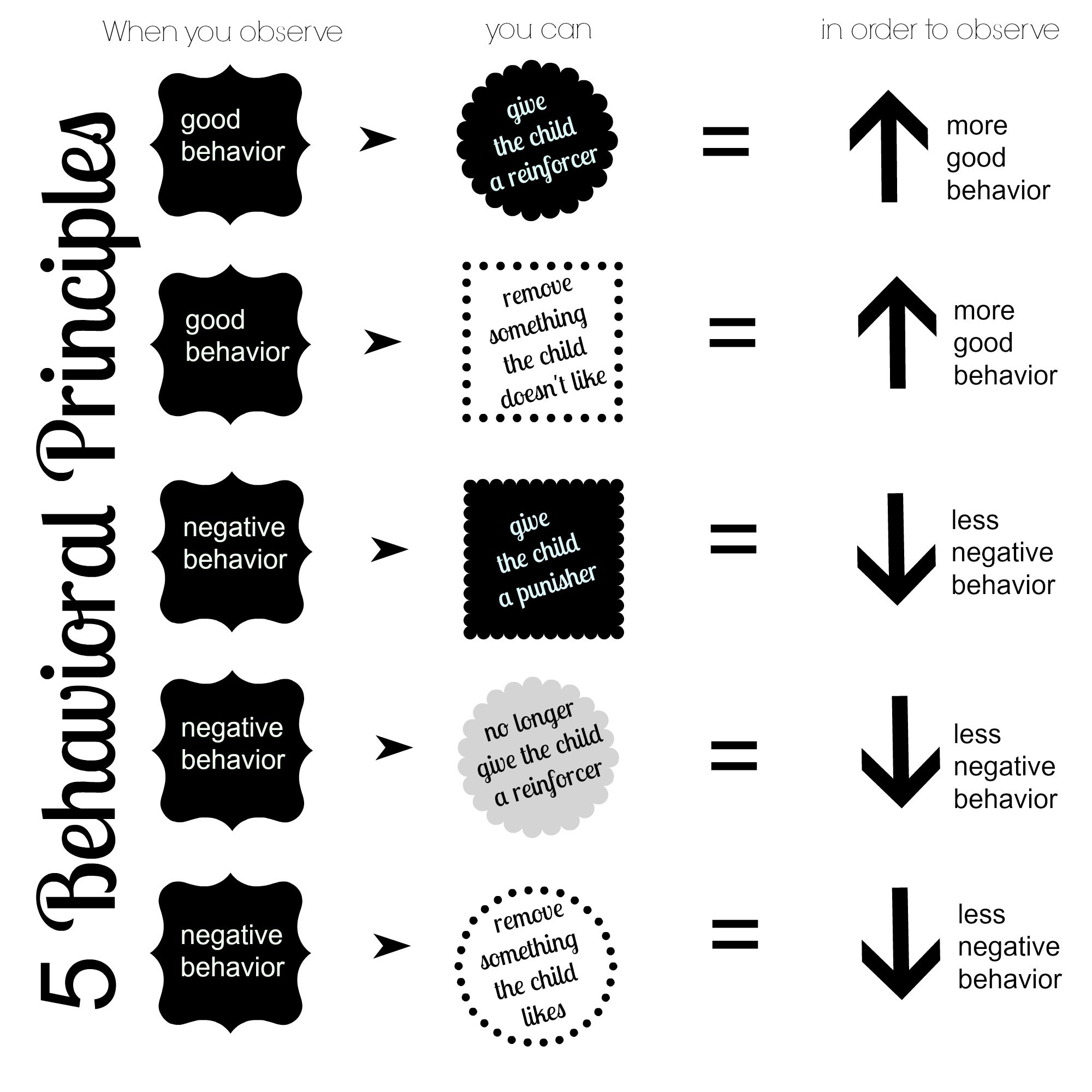 For example, if your child is a teen, you have a longer time frame in giving him/her a reinforcer/punisher to your child, up to a few days. For example, you could reward him/her for following his/her daily routine throughout the week with a pizza night on Friday, and that will reinforce your teen following his/her daily routine. If your child is a toddler, you only have a few minutes. He/she wouldn’t associate a pizza night on Friday with his/her actions on Monday, let alone the day before. He/she would understand a sticker for a successful trip to the bathroom, given right after the trip. And you could have a larger reward for an accumulation of stickers. The trick is that the toddler needs something that is reinforcing to him/her immediately.

Center for Marriage and Family Counseling

The Center for Marriage and Family Counseling has been treating mental health and relationship issues for 25 years. Here are some answers to frequently asked questions. Click here to learn more about associates with our clinic. Free consultations are available upon request.