When to Seek Marriage Counseling in Frisco TX 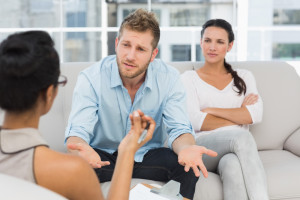 All too often people enter into marriage without fully understanding that it is a relationship that requires both people involved to contribute. When one or both of the spouses thinks marriage should be the happy ending to a fairytale, disillusionment and disappointment are sure to result. Unfortunately no matter how gorgeous the wedding dress was, or how memorable the special day became, there’s so much more to making a marriage work than the wedding day itself. Considering that Census.gov reveals that there were approximately 76.9 divorces per 1000 in Texas in 2009, there are a lot of people who would benefit from marriage counseling in Frisco TX. Unfortunately, however, sometimes it can be difficult to know whether you need help from a counselor or if you have simply hit a rough patch.

Communication is vital for any marriage to survive all of the tough times that are inevitable. According to the Huffington Post, when you are not talking to each other or if one or both of you are afraid to verbalize issues, the lack of communication is an issue that may benefit from marriage counseling. Along the same lines, you may be talking but, if discussions are negative and typically end in shouting matches, it is time to consider marriage counseling in Frisco TX from a professional.

Marriage counseling after an affair is vital. Future Scopes reports that affairs are among the leading causes of divorce with statistics showing that nearly 27 percent of divorces listed extramarital affairs as the cause. Psych Central recommends counseling even if an affair has not occurred, but if one or both spouses are considering or have considered being unfaithful. Having an extramarital affair is certainly damaging to a marriage, but the fact that it is even being considered is a symptom of other issues. Those problems should be resolved. The best case scenario is that the marriage will be salvaged through counseling but, if the problems are irreconcilable, an affair will only complicate matters.

If separation or divorce seems to be the only solution, it is time to get help from a marriage counselor. The Center for Marriage and Family Counseling offers compassionate, comprehensive marriage counseling for Frisco TX couples. It is also a resource for premarital counseling to help you build a firm foundation before common issues such as incompatibility, financial issues, communication problems or infidelity become turn into trouble. Before you consider marriage or divorce, call the experienced, professionals at the Center for Marriage and Family Counseling at (214) 250-7808.

Center for Marriage and Family Counseling

The Center for Marriage and Family Counseling has been treating mental health and relationship issues for 25 years. Here are some answers to frequently asked questions. Click here to learn more about associates with our clinic. Free consultations are available upon request.